Holograms that are not Holograms

No End to Things That Are Not Holograms, by Molly Brodak

(some pictures, our choice)

The company responsible for the Tupac ”hologram” that performed at Coachella last year, Digital Domain Media Group, recently went bankrupt somehow, despite the millions pouring in from investors, the $400,000. Dr. Dre himself reportedly paid for the puppet Tupac, and funded plans they had to resurrect Elvis as a ”hologram” and possibly pitch ”holograms” to political candidates to deliver virtual speeches this upcoming election. By Molly Brodak

OK, so Tupac is double dead now, him and his hologram. Sort of. I mean some still insist he is not physically dead, but one thing for certain I feel moved to clarify is that he was never a hologram. Not even remotely close. By Molly Brodak 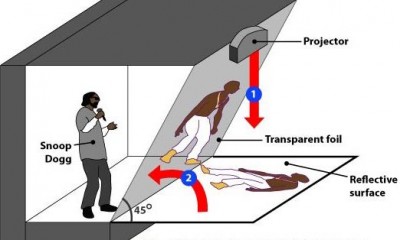 The Tupac ”hologram” was simply a high-quality isolated video projection (niced up with 2-D graphics to provide depth cues) on a transparent screen (a sheet of mylar stretched across stage). Not very different, technologically speaking, than what you see when you go to the movies. It was sold as a hologram because it seemed like a free-moving 3-D object beamed from some magic device, like what we saw in the first Star Wars movie when Princess Leia sent an image of her bodily form to convey a message to Obi-wan instead of just simply sending a recording of her voice or some writing. The significance of her using her whole, two – dimensional (but shrouded) body to plead her message, virtually, is a topic for a different article, but of course this fictional technology is already inspiring a robust pursuit at MIT. By Molly Brodak

The real name for what you saw in the Tupac trick, or in Gorillaz “live” stage performances of its cartoon members, or in Hatsune Miku, a blue-haired Vocaloid anime girl/voice synthesizer whose songs can be created by users, is the Pepper’s Ghost Illusion, which you have seen if you’ve ever been through the Haunted Mansion at Disneyland. It’s a stage trick involving secret rooms, angled glass and lights that create ghostly images that seem to float and disappear midair. Although mentioned by some news sources, Pepper’s Ghost Illusion obviously doesn’t sound as technologically-advanced as hologram; in fact, it sounds a little quaint and old-fashioned, which is why marketers haven’t seemed to want to bring it up. (Peppers Ghost, illusion technique some 300 years old) By Molly Brodak

The only reason this misnomer bothers me is that it masks the true facts of real holograms, and the facts are wonderful, more wonderful than the facts of Pepper’s Ghost Illusion. I recently finished writing a whole book inspired by the facts of holograms borne out of an accidental obsession that started when, for no reason I can remember, I looked up holography on Wikipedia. By Molly Brodak 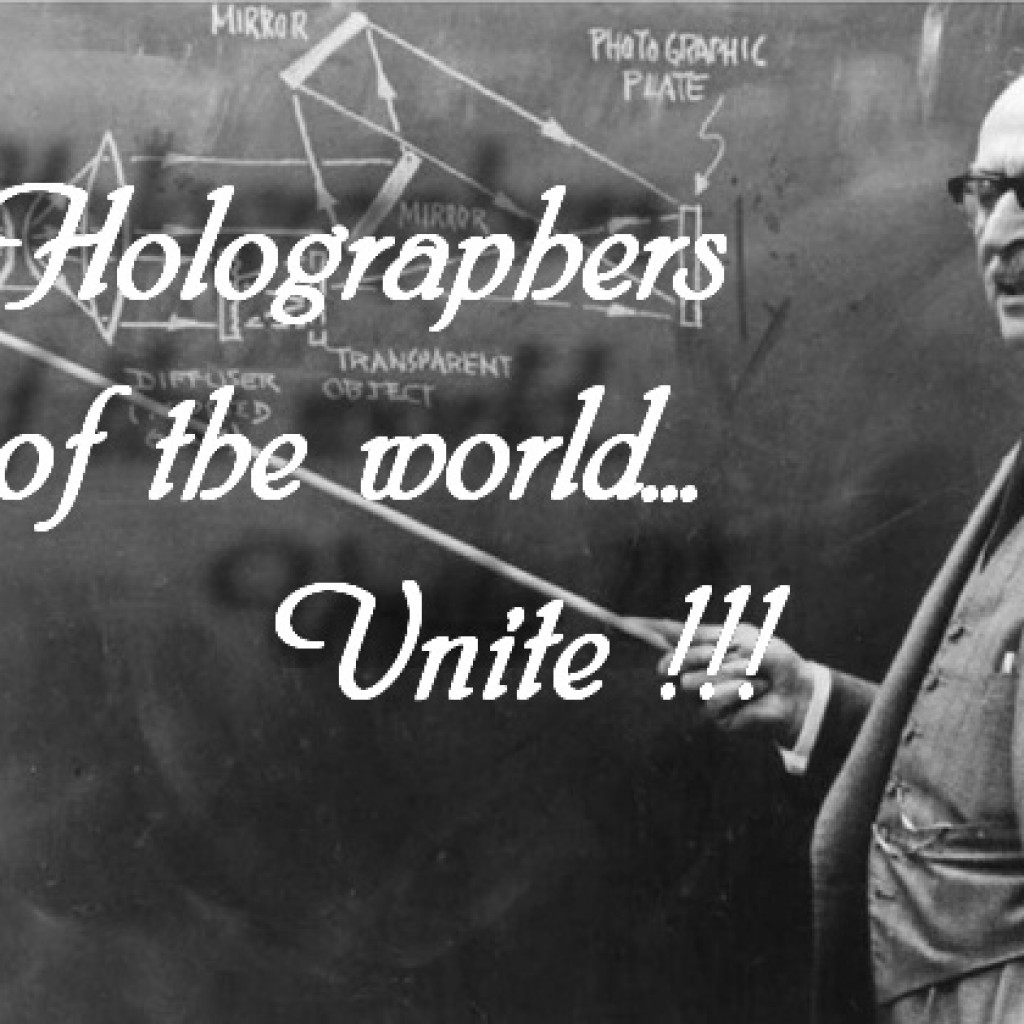 (Nobelprize winner of Holography professor Dennis Gabor – he must laugh looking at all nonsense about his invention. No video projection films is needed for holograms!)

Holograms aren’t, and might never be, projections. They are more like photographs than anything else. There’s one in your wallet right now, probably, on a credit card you might have. That little rainbowy dove on a silver square? Tilt it vertically in bright natural light. It’s not that it moves, exactly—in fact it looks quite stationary in its space. It’s more like you are able to see more of the shape, as if looking around to its sides, as you tilt. Like you are the one who is moving around this virtual object. That’s a hologram. In this way, a hologram is more like a book than a movie. You move, physically, across the surface of a book, hands in and out of pages, rather than sit stationary as a movie moves around in front of you, like the Tupac hologram does. By Molly Brodak 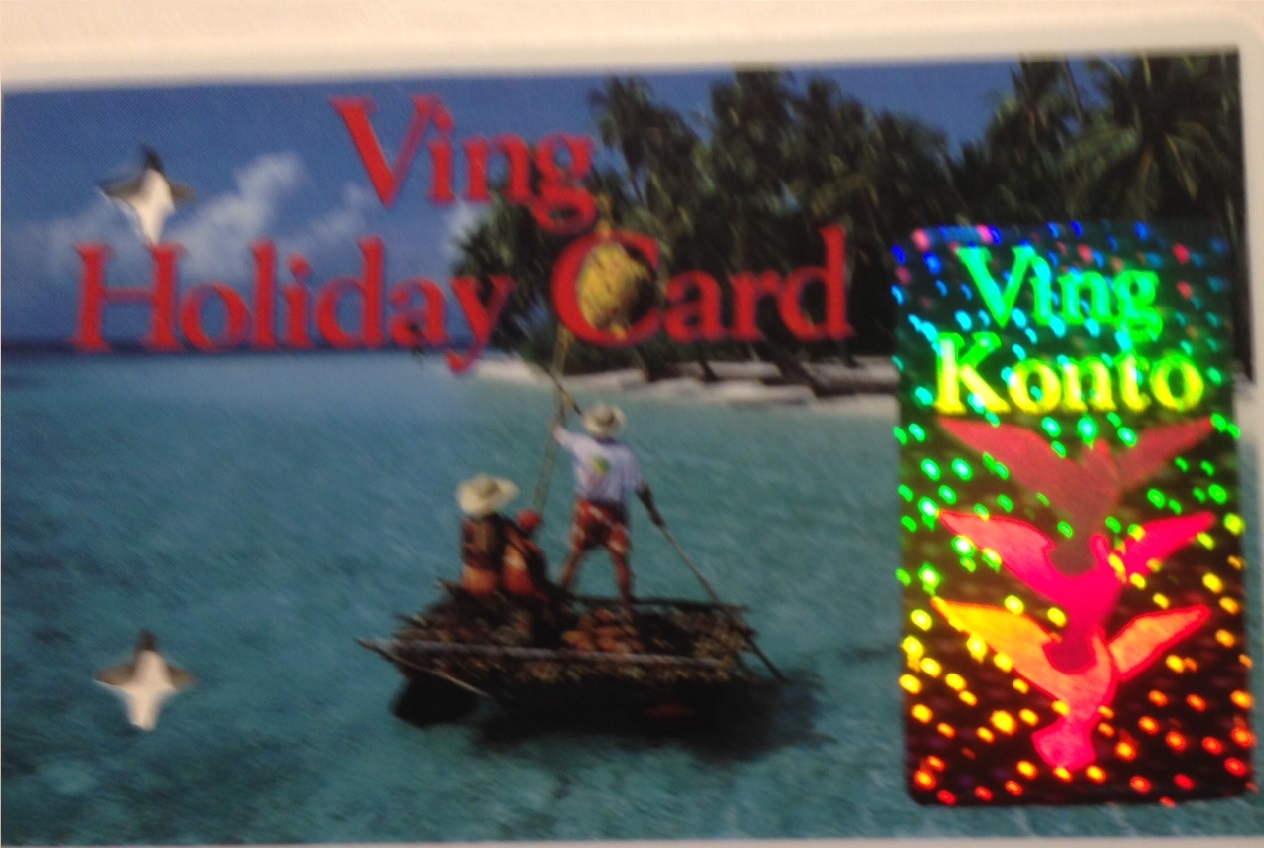 (HoloMedia AB has delivered many plastic cards with a unique hologram, special made for the customer, as this Ving Holiday Card with another dove than what Molly Brodak refer to). Photo Mona Forsberg

Specifically, that dove is a rainbow hologram, the only kind you can see in normal light. It’s the worst kind of hologram really, the cheapest, with the least depth & detail. The cover of Tao Lin’s Taipei has a holographic foil finish on the title text, which alone received attention for its effect/meaning. This pattern or wallpaper holographic print is a series of alternating geometric holograms mounted onto a metalized polyethelene terephthalate substrate, or PET. The shapes you see in the pattern were, at one point, developed from real planes, raised surfaces at a minimum, made into holograms and now endlessly repeated by re-embossing the original hologram into plastic suspended above some shiny material. By Molly Brodak

(Type holographic wallpaper, stock-foil, can be overprinted with a number outside). Photo Mona Forsberg

Holograms are made by beaming lasers onto a 3-D object (in that case, a model of a dove). The light is split—part of it bounces off of the object and hits a photographic film and is recorded, without a lens, the other beam bypasses the object and hits the film straight on. The light waves interfere with each other and the interference is recorded. In order to see the image in a real hologram, a laser hologram, you have to see the original light source illuminate the surface of the film. The laser itself, like a key, unlocks it. Which is why you don’t really see holograms much. By Molly Brodak 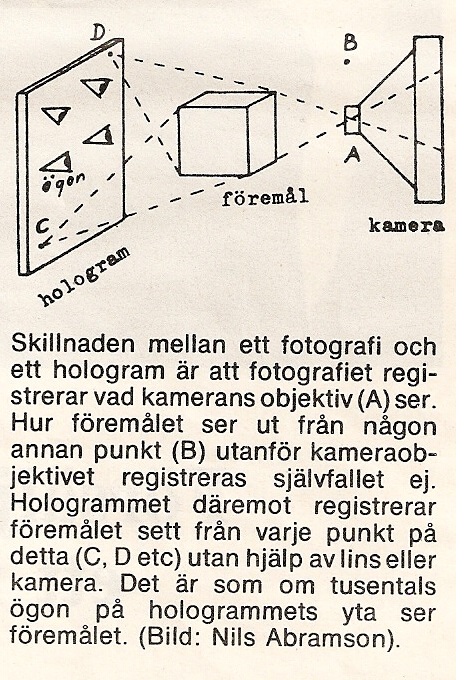 This is because, unlike a photograph which records light scattered from a single point or plane in the scene, each point on a holographic recording includes information about light scattered from every point in the scene, according to R. Nave of Hyperphysics. Which means that each point on the hologram knows all the information about all of the other points on the hologram. I have tried to think of a metaphor for this but almost nothing, natural or manmade, works like this. It’s close to being how some cells reproduce by splitting, or how fractals work. Still, neither of these are quite right. By Molly Brodak

This is Shanice the ”holographic” receptionist at a town hall in Brent, UK. She directs visitors and will answer questions when someone pushes a question button on the touchscreen on the desk behind which she sits. The town councilor and those he paid to develop and install Shanice are as excited about how cutting-edge Shanice is as the general public is frustrated with her—yet another mechanized customer service device designed only to cut costs and distance consumers from personalized help with their time-consuming and messy problems. By Molly Brodak

So why this proliferation of pseudo-holograms? They are, after all, just video recordings. It must be simply the screen we want out of, as if a talking head unboxed will cross that uncanny valley robot/android developers hover over in building their devices, and the freed recorded image will feel more satisfying or startlingly present, more like us. By Molly Brodak

There will be more ”holograms” like Shanice, because we still want to get to childish idea of the future we were always promised, with flying cars and elaborate ”holograms” used as message transmission for no practical reason other than that they are neat. The word hologram, I think, will lose its original meaning in a decade or so. It will come to mean seemingly-screenless projection of animate person/thing and that makes perfect sense: we are seeing these things in the world, whereas real holograms are almost never experienced. (The one good place you could have seen a bunch of holograms, the Museum of Holography in Chicago,,,, although the MIT Museum has a nice collection to visit). Still it grips my heart a little to see how ironically backwards this semantic shift is: transferring the meaning of hologram onto these pretend-futuristic projections, which are actually prehistorically coarse compared to the original form of holograms that are, I think, real magic. By Molly Brodak

Molly Brodak is the author of A Little Middle of the Night (University of Iowa Press, 2010) and the chapbook The Flood (Coconut Books, 2012). She edits Aesthetix and lives in Atlanta.